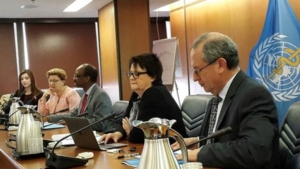 In 2009, PAHO launched the initiative “Cardiovascular Disease Prevention through Population-wide Dietary Salt Reduction” with the broader goal of reducing population dietary sodium intake in Member States and meeting the WHO 2025 global target of a 30% relative reduction in mean population sodium intake. Dr. Mary L’Abbe has been part of the Technical Advisory group accompanying this Regional initiative and chaired its phase 3.

As part of Phase 3 of the PAHO initiative to reduce population sodium intake, a decision was made to expand and update the PAHO regional sodium reduction targets to lower the current target values, for which many foods are now meeting, and increase the number of food categories with targets, where warranted.

The L’Abbe Lab, as the WHO Collaborating Centre on Nutrition Policy for Chronic Disease Prevention, has collaborated with the Pan American Health Organization (PAHO/WHO) on updating Regional Sodium Reduction Targets. 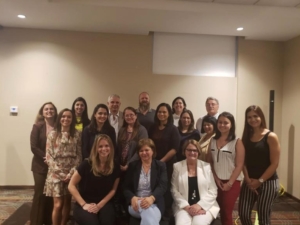 Completed in 2020, this project aimed to produce evidence and tools to support policies and interventions to reduce sodium intake in Costa Rica. Our research team provided scientific evidence to identify the main dietary sources of sodium in the Costa Rican diet. We also reported on students’ knowledge, perceptions, and behaviours related to sodium, food labeling, and health. The evidence served as an evaluation baseline for the National Plan for Salt Intake Reduction in Costa Rica. Other countries in the region will benefit from Costa Rica’s initiative and experience.

The International Network for Food and Obesity/non-communicable diseases (NCD) Research, Monitoring and Action Support (INFORMAS) is a global network of public-interest organizations and researchers that aims to monitor, benchmark and support public and private sector actions to create healthy food environments and reduce obesity, NCDs and their related inequalities. The INFORMAS framework includes two ‘process’ modules, that monitor the policies and actions of the public and private sectors, seven ‘impact’ modules that monitor the key characteristics of food environments and three ‘outcome’ modules that monitor dietary quality, risk factors and NCD morbidity and mortality. Monitoring frameworks and indicators have been developed for 10 modules to provide consistency, but allowing for stepwise approaches (‘minimal’, ‘expanded’, ‘optimal’) to data collection and analysis. 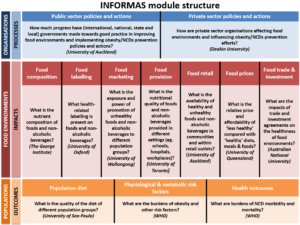 For a full list of INFORMAS publications in Obesity Reviews and others co-authored by Dr. L’Abbe, click HERE.

Additionally, Dr. L’Abbe and the INFORMAS team have worked on a project that addresses the increase in obesity and nutrition-related non-communicable diseases (NR-NCDs) in Ghana. Code-named the Measurement, Evaluation, Accountability, and Leadership Support for NCDs (MEALS4NCDs) project, it aims to measure and support public sector actions that create healthy food marketing, retail, and provisioning environments for Ghanaian children using adapted methods from INFORMAS.

For more information, visit INFORMAS Global and INFORMAS Canada, which is led by Dr. L’Abbe and Dr. Lana Vanderlee, who previously trained in the L’Abbe Lab as a PDF.

Poor diets increase the risk of diabetes, cardiovascular diseases and cancer1. Dietary guidelines (e.g. Canada’s Food Guide (CFG) or Diabetes Canada Clinical Practice (DCCP) Guidelines) aim to improve the dietary intakes of the population by recommending consumption of foods or nutrients (e.g. fruits and vegetables, fibre) while limiting the intake of others (e.g. high salt/sugar foods). Recently Front-of-Pack (FOP) labelling has been introduced in Canada and France to support healthy eating.  Such labelling relies on nutrient profiling (NP) systems, which rate foods based on their nutritional composition.

This research project is a Canadian-French collaborative initiative in the area of diabetes-related research. The aim of this proposal is to evaluate the rating of foods using the NP systems underpinning: (i) the Canadian ‘high in’ FOP labels (based only on nutrients-to-limit) and (ii) the French Nutri-Score FOP system (based on both nutrients-to-limit and to-encourage).  Two large Canadian databases of foods will be used to compare the ability of each system to identify foods that adhere to CFG and DCCP guidelines. Additionally, this project also evaluates whether the diets of a nationally representative sample of the Canadian and French population adheres to CFG and DCCP guidelines.

This research was recently presented at the 2020 Canadian Nutrition Society meeting. See the abstract here.